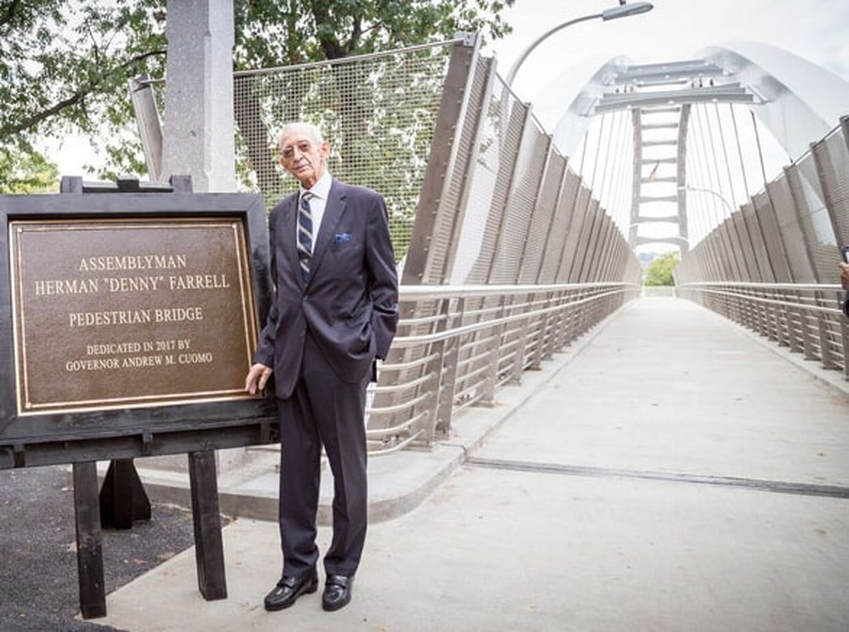 ​On September 5, 2017, New York State Governor Andrew Cuomo announced the completion of the $25 million Denny Farrell Pedestrian Bridge over the Henry Hudson Parkway at 151st in Manhattan, which will increase access to the Fort Washington and Riverside Parks for bicyclists and pedestrians, as well as the 750-mile multi-use Empire State trail, which will be the longest state trail in the nation and is expected to be completed in 2020.

​The Pedestrian Bridge project consists of a 270-foot-long bridge spanning over the Henry Hudson Parkway and Amtrak train tracks at 151st Street with ramps on each side.
Herman "Denny" Farrell was born on February 4, 1932, in Manhattan, New York, to parents who immigrated from Jamaica and the U.S. Canal Zone.  He graduated from George Washington High School and attended New York University.  His political career began when he worked for Mayor John Lindsay in the Washington Heights office. In 1970, he was elected a Democratic state committeeman; for three years he was elected district leader and a year later he began his long tenure as an Assemblyman representing a district that included Harlem and Washington Heights. He was re-elected 21 times to this post. In this capacity, he earned the respect of political leaders beyond the state and later was a member of the Democratic National Committee.
© 2017-2021​. Jamaican Americans. All rights reserved.
Big Up JA Network